Joachim Reiter is an academic, a social psychologist, and a student of Kindred and human behaviour. He doesn't like the term “propagandist” and much prefers the term “information reinterpretor” or “truth maverick”. Comrade Reiter sees it as his duty to keep the people informed with policies and current affairs so that they can adequately participate in public life.

Joachim Reiter was an intellectual. He was a PhD in Humboldt University before the war; he was also a member of the Communist Party of Germany (KPD). In West Berlin, he persisted under the Invictus regime, living for the day when the city was finally liberated by the Carthian Democratic Party. Sometime during his Requiem, Comrade Reiter came across the writings of E.B. Carth, and was inspired by how the written word can transcend the author who created it. He himself became a prolific writer, known as the author of pieces such as On Inequality and the Distribution of Wealth, Discourse on the Manifesto of Francesca de Graaf, and Strategy and Tactics of the Class Struggle. Strategy and Tactics was said to have circulated in Berlin shortly before the fall of the First Estate.

Joachim Reiter is a pale, mousy man in a frumpy brown suit. And somehow, he is a Daeva. His suit is decades out of style and made in an exceedingly unfashionable cut. He is of average build, with brown hair, a sharp nose, and a soft, pointed chin. His eyes hold an intense gaze, distorted under the thickness of his prescription glasses. A stray lock of hair falls limply over his forehead, in an otherwise conservative cut that is parted on his left. His lips are thin and downturned, in a way that would suggest that he was mildly unhappy. 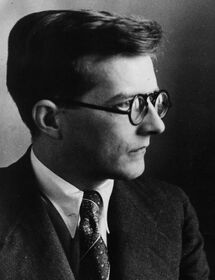