You're in your haven and you hear a harsh knock on your door, just before dawn. The man most likely standing behind that door is Hauptsturmführer Egon Schenck. It's over. It's all over and you know it. They'll start breaking in the door any minute now. And then they'll stake you and drag your body out into the sun. You hope.

The man behind the gas mask has a deservedly fearsome reputation. They say that he was an SS officer in Sachsenhausen, a concentration camp 22 miles north of Berlin. When the Red Army moved in in 1945, Hauptman Schenck and many of his men were captured. And when the Soviets worked to turn Sachsenhausen into one of their “special camps”, run by the NKVD and administered under the Gulag, Egon Schenck realised that he would never live to see the sun again.

One can only imagine the horrors that Egon Schenck endured under the hands of the Soviets. It is believed that he was disfigured by the tortures and now wears a mask to hide his scars. By the time the camp closed in 1950, 12,000 inmates were dead from various causes, and the now-no-longer-living Schenck was released. He spent his time in the nearby city of Oranienburg (and was known as the “Terror of Oranienburg”) before finally committing to the Carthian cause in East Berlin. Within the Secret Police, Schenck was swiftly promoted to “Captain” and was known for his cold, businesslike efficiency in inflicting fear and pain. Torture is not used to extract information; it is used to send a message.

The man is dressed in a black military uniform with the distinctive cutting of the SS. He also wears an SS cap, with the silver braided cord but missing its skull and Reichsadler. He is also missing most of his brass save for a silver pin of the Carthian icon on his lapel. There is a WWII-era gas mask covering his face. Every inch of his skin is covered—hands are clad in black leather gloves and feet in knee-high jackboots. His posture is ramrod straight, a by-product of his military training. 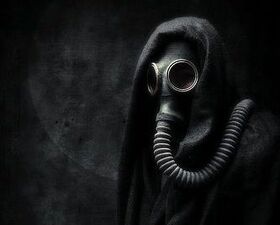