Berlin 1974 Wikia
Register
Don't have an account?
Sign In
Advertisement
in: NPC, Circle of the Crone, Nosferatu

Agathe is a Haunt and looks the part. Rumour has it that she was an exceptionally beautiful mortal in her living days—and that the curse of her Clan warped her face and destroyed her locks of golden hair. She presented to the court of Berlin sometime in the year of 1946, as the childe of Istvan Nemeth, an ancient, elder Haunt who had since went into hiding. She was otherwise unremarkable until she rose to prominence by being named Hierophant and Primogen of the Circle. She accepted the post from the former Hierophant Gudrun, who had fallen out of favour due to her descent into madness.

The Hierophant is known for her prophetic powers, and rumour has it that her visions allowed her to seize power and manoeuvre her way up the political ladder. She is attended by a veiled woman dressed in black, who in empowered to speak in her place.

Agathe appears tall, bald, pale and hunched. She has slightly oversized ears, beady eyes, a sunken midface, and a pink, toothless mouth with only a pair of rat-like fangs. She is all skin and bones; her joints protrude at the ends of her gangly limbs, and her spine is a series of bony ridges that snake up her back. Her skin is flawless and white, as smooth as marble. Despite her appearance, she is composed, restrained, and holds herself with elegant poise. 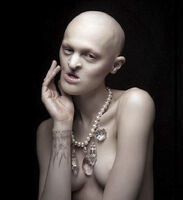 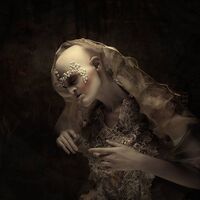 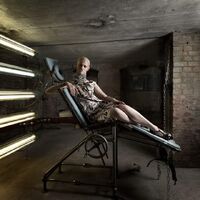